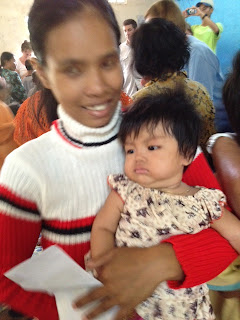 This has been the most emotionally exhausting day for me so far.

We went into a village, to a tiny local church to do a community outreach today.  We then stopped at another local church on our way back to the hotel.


We took the oldest kids from BB3 with us.  They performed 2 dances each place we went and Ron got to present the gospel to the attendees.  It was a HUGE honor to be there. 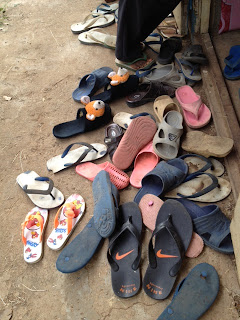 As I entered I couldn't help but notice all the shoes - they represented all the people inside...To see the empty eyes and smile-less faces proved once again that the joy that Jesus Christ brings to his children is immediately recognizable, even in the darkest of societies.  The few among them that did know the Lord - shined like a bright light even in the brightness of day!  You could tell these faithful pastors and their families were madly in love with the Lord and the burden they carry for the people around them was almost physically visible.

The team from Crossroads wept almost the entire time we were there, watching the worship dances and listening to the stories and the message made us long for those around us to know our Lord.


Serving in these villages takes on many different forms, holding babies, giving out candy that you purchased long ago just for this occasion as well as handing unexpected money to the poverty stricken pastors.

As we moved to the second little church, we anticipated this stop partially because our dear BB3 House Parents grandmother, whom we had all come to love would be at the service.

When Jocelyn was in Cambodia last, the BB3 grandmother Priun, had formed a very close bond with my daughter Jocelyn.  Jocelyn had a necklace to give her and couldn't wait to see her.

When the vans pulled up Pruin appeared looking through all the windows of the van, Jocelyn was in the back and not easily seen.  As one person after another got out, Pruin excitedly grabbed each person she knew - kissing and hugging them.  And then Jocelyn stepped out.  They held each other for a very long time and finally made their way to sit together in the service.  Of course I was sobbing.
The first thing we were told was that this little church had just lost their young pastor.  Some thought he died of a heart attack, some from a broken heart for the people of Cambodia and Thailand, and his close friend told me he thought he worked so hard telling everyone he had opportunity to, that he died of exhaustion.  They introduced his widow, and from that moment on I was overcome with grief for a woman I had never met.  She stood and everyone clapped, she sat back down and seemed to be under control. 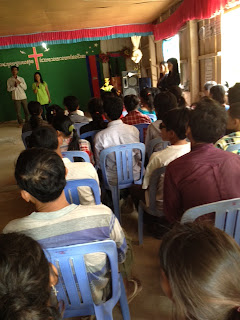 The service was amazing, a teaching on David and Goliath and with worship dance, words to worship songs sung in Khmer that I had no idea what they said and yet I worshiped deeply.  Worship has no language!

Following the service I asked one of the translators from BB3 if it was ok for me to speak to the young widow.  She said yes.  I asked her to tell her how sorry I was that her husband had passed away and then we both totally lost it and fell into each others arms.  I experienced sorrow on a level I cannot explain, as if I had known this many myself.  I placed some money in her hand and promised that I would hold her up in prayer and then I had to leave.  I was emotionally spent, but deeply in love with this congregation.

Finally on our way home, we stopped to drop off Pruin at the little hut that she now lived out her last days.  I was once again overcome with emotion knowing this could be the last time we ever get to see her.  She isn't well, that is why she no longer helps cook at BB3.  The end of life comes so quickly in this land, I think someone said she was only 57... 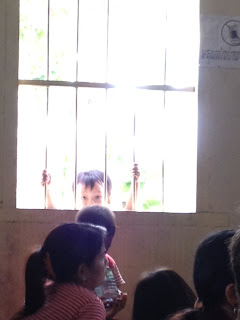 As our time with these lost, hopeless people drew to a close I saw across the room a picture I won't soon forget.

This picture described perfectly these peoples' plight without God.  Bars kept one small child from joining us in the room.  Those bars in that moment, represented the sins that separate us from God.  Only Jesus sacrifice removes them.  How I pray our work today can be used of God to change lives and give hope for eternity!
Posted by Lori Biddle at 3:37 AM