when it's undeniably Divine

For those of you that I've had a chance to directly talk to about Jocelyn and Jared's marriage, I've described it as a Fairy Tale, too good to be true.  And it continues to be so...

As I talked to Jared's family when we were there recently, his father again described to me the impression they all had when meeting Jocelyn for the first time years ago in Cambodia.  His father talked about the comments he made to his family about Jocelyn being perfect for his oldest son Jared, and said he couldn't stop thinking about that possibility.   Later of course they found out she was married and obviously gave up on the idea, but the Lord didn't.

When Joci first told me she was talking to a guy on-line that contacted her when he saw that she had adopted Trinity as a singe mom, I thought to myself "please Lord - not someone on-line", then I realized whose family he was a part of and hope again filled my heart for my daughter and grand-daughter.  Jared was interested in adoption or fostering as a single dad and wanted to know more.

It fills my heart with worship as the full understanding of the fact that all these years after our two families first met in Cambodia, God already knew our kids would spend the rest of their lives together...  and as we prepare to say goodbye to our girls 2 weeks from now,  our hearts are totally at peace despite how far God's chosen to move them.

Today as she lead us in worship I praised the Lord that we've had her here in Mansfield for most of her life.  I thanked Him that we got to watch her become a mother and how unbelievably natural she is with her daughter, and thanked Him that she's spiritually so mature and ready to be used of Him somewhere new.

This weekend was the last music package that she will plan for Crossroads and lead for one of our worship services and it was amazing! 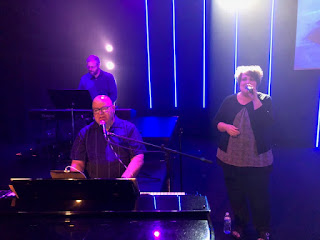 Lord I Need You
From the Inside Out
Resurrecting
Broken Vessels

To watch our service on-line go to crossroadswired.com