Sunday night we had the Magnification picnic at my house. Our attendance was great with a little over 70 enthusiastic team members present!

A picnic format gives me a great opportunity to thank and recognize our teams. I began the night by thanking everyone for their hard work this past year as well as introducing the Elder over our area of the ministry.

The Elder over Magnification is Jeff Schultheis who opened the picnic in prayer and served as a judge for our wacky team building games. 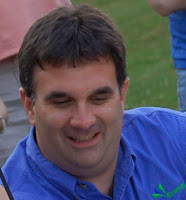 The pace picked up as we divided everyone into teams and gave them crazy instructions that challenged their ability to communicate, work together and be creative. All elements required in the Magnification Dept.

This part of the evening is always a hit and causes team members to quiz me weeks in advance about what activities I have planned. I give them no advanced information!!

I asked our main announcement guy to work as the MC over most of the activities. And believe me; he rose to new heights with his constant taunting and comments all night long. (The man never stops talking!) We are blessed to have Bill Hill (yep that’s his real name), as are our main announcement guy. Over the past 12 years we have dressed him in both thematic and completely random costumes and put him in various videos in an effort to make the dreaded announcement segment fun.

One more segment of our picnic has sadly become a tradition as well. The dousing of the Director of Magnification, with any kind of liquid they can get their hands on. The last picnic we had I was chased down by 2 of my staff with a large ice water cooler, I did outrun them for quite a while, but eventually gave up. I learn from my mistakes and vowed never to “provide” the opportunity by filling coolers again. So, Sunday we had canned soft drinks and bottled water. You ask did this keep me dry? NO! They planned ahead and 3 guys brought already filled super soakers! Foiled again!!!

I could have planned forever and not come up with the final event of the night. One of our sound guys owns a Hummer and had asked to drive it through my creek. We finally relented and much to our delight, he buried it and couldn’t get across!

Everyone began giving him suggestions, and even took matters into their own hands. Next thing I knew one of our singers had his truck out, filled it with other Magnification members and tried to pull him out.

As you may have guessed, it didn’t work. Finally we got a larger truck and were able to free him by giving him a little tug.
I was surprised by how long everyone stayed just enjoying one another and getting to know others they don’t normally serve with. The night seemed to be a hit! accomplished.
I am now going to take a very long nap!
Posted by Lori Biddle at 4:36 PM

Congratulations on getting your blog posted! Can't wait to read everything you write! BTW... pics don't show up for me on my computer at home. - Mark

Great party the other night. I'm kicking myself for leaving too soon. I wanted to see the Ford truck pullin' the Hummer out of the creek! Built Ford tough, baby!

I'm still bummed about not winning a door prize!