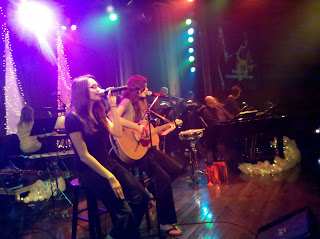 Tonight was the first night of our Christmas services.  As I prepare to sleep - I am mulling over all that we experienced.

I was standing on the stage when the doors opened and people came pouring in.  Every seat was soon full..  This took my breath away...well, actually filled my breath with praise!

Just after doors opened to being - fire alarm went off.  Ok, so maybe we got just a little bit excited with the haze... We evidentially have an alarm activated by smoke versus heat.  Probably a great idea in detecting fire earlier than waiting for the heat to reach a certain degree.  But, on this night not so great.

After shutting the alarm off and calling the alarm company to ask them not to respond, we realized that the air conditioner unit over the stage automatically shut off because it was the unit that detected smoke within it's  ducts.  This caused us all to scramble to reset the breaker kicking the unit back on.  Without this unit it is almost intolerable on stage under all the lights.

Next, I got a call from the green room asking me if I had removed the bassoon players 'reed' which she had left soaking in a cup of water.  Of course the answer was yes, I always do a last minute sweep of the stage removing glasses, paper, jackets or instrument cases.  The problem was, when I picked up the glass I couldn't tell there was a reed floating in it due to the lights on the stage being down.  I ran down the back hallway, entering backstage frantically waving a singer to take the cup to it's owner just in time for the bassoon to be featured.

Finally back in the auditorium I began my usual pace back and forth across the rear of the auditorium listening, listening, listening considering sound suggestions, watching, always watching for changes that should be made to ensure a smoother, distraction-free delivery of the music or transitions between.  I realized that I was wearing a scowl on my face as I scrutinized each note.  I tried to relax.

As the last song picked up tempo - the audience joined in spontaneously and 'drove' the tempo faster and faster and then it was time for people to stream back out.  It was over.  The hours of preparation behind us. I watched as people hurryied off to their homes where Christmas preparations were in their final hours.

We had them, for just this hour.  Did we take advantage of this precious time?  Did our work make a difference?  This is not for us to know.  It makes no difference if we ever know - all I do know is this is a privilege and tonight for one hour - we offered the Christmas child, our King, our very best.