I have tried to write this week but each time I think I'm done there is always one more thing!

I have not had a chance to be creative in any way this week.  Just checked off lists of to-do's, budgets, concert details and lots of cooking.  I have missed writing this week...

As I prepare the details of my son and future daughter-in-laws wedding shower I can't help thinking back over the past 23 years and wondering how he is getting married already?

He has made me laugh a LOT over the past 23 years - his pictures always contain some crazy smile!

He has been an amazing young man since he was young enough to communicate.  One of the things I remember from early childhood are all the ridiculous made-up words he would always come up with.  Especially the words that came out when he was frustrated, so hilarious!

Oh and he was frustrated!  He would meticulously line up matchbox cars or work with blocks for hours and just get furious at himself when he would make a mistake that caused collapse or crooked lines.  Unacceptable (in his opinion)!  He was not forgiving of his shortcomings!  Yet he has always been extremely forgiving and VERY tolerant toward others.  This is a gift that has followed him into adulthood and served him well!

One of the other things I remember was feeding him his bedtime cereal as a toddler while he bathed, this was an attempt to kill two birds with one stone.  Bathing was quite the long ordeal with Eric - but anytime I had him trapped it became increasingly necessary to combine activities!  Even in the tub he made crooked lines with toys and bubbles.

I also remember how extraordinarily strong his hands were from a very young age.  I would be doing my hair in my bathroom and something would catch my eye - next thing I knew, he was shimmying up the door jam hand over hand when he was just 3 years old!  He could climb anything using just his hands.  And believe me he is one guy you do NOT want a shoulder rub from.  Excruciating!  God made strong hands for Eric.  Maybe so he could be the excellent musician he has become.

And now he prepares to marry...emotional.  No time for collapse... 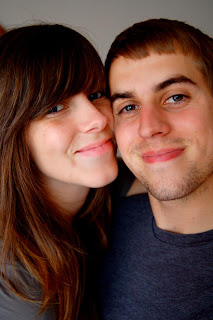 He is ready, so I must be too.  He has prepared well, and chosen well!  We have prayed for her from the day we had Eric - and we now are also in love with her.

May Eric and Alyssa have the same beautiful lasting love that Ron and I have been blessed to experience together in the Lord!