the best use of time

Yearly I struggle with how to appreciate all the volunteers that make up the department at our ministry that I oversee.  There are nearly 150 volunteers and 3 full time staff under my supervision.  (How this came to be is a complete mystery!)

Anyway, one thing I care about deeply in ministry is that people be given opportunity to serve in their gifted area, using their God-given talents AND, that they feel connected and appreciated.

So the struggle remains – how do I show volunteers that serve 52 weeks a year how much they are needed by the local church, how they are making a difference in people’s lives for eternity and how much they personally mean to me?  Tough!

I concluded that there were two things that would help to accomplish this.
1.     1. Invite them to our home
2.     2. Show them how much of a mess our ministry would be if they weren’t serving in areas in which they are gifted

I decided to ask each team to switch places with another team that they normally do not serve on.  They were handed instructions and given 15 minutes to prepare before the ‘service’ began (and I use the word very loosely).

Our regular vocalists became the tech team.  Their duties at the picnic included:  writing out all the song lyrics by hand and cutting strips of Poster Board that they had to hold up as the song was sung.  (A typical service at Crossroads uses Media Shout to project the words on screens).


They had to choose 2 people to hold colored light gels up in the air at just the right place in the song representing lighting color changes that would typically be programmed for our services.  And 2 people that had never run sound before ran the small soundboard.  (Really badly I may add)

Our regular band members become the actors.  They performed the ‘’doctors office” skit where one actor catches all the other actors ailments as they enter the office. Quite entertaining!

Our regular tech team became the singers.  (This was hideous)

Our regular Drama team became the band.  (This was HILARIOUS)

Our Youth Band became our liturgical painters during the music portion of the service.

And, we had a grand finale featuring the 3 staff guys in our department destroying “Dance of the Sugar Plum Fairy “ – this horrifying ballet will be etched in all of our brains forever! 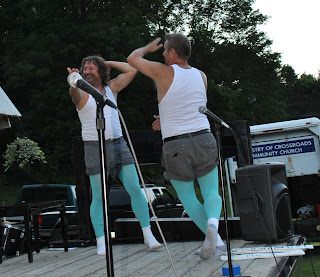 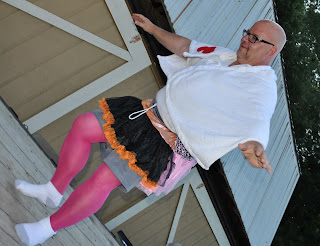 I really don’t know when I have laughed so hard and for so long as I did Sunday night.  And the real treat was listening to all the faithful team members laughing as well. 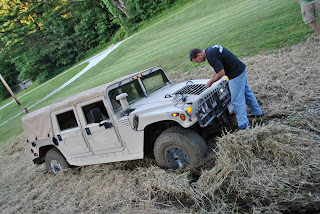 We capped off the night with a repeat attempt to jump our creek by one of our team members with his Hummer.  (This attempt has become a picnic tradition). It was a repeated fail as he once again buried his Hummer up to the doors in mud.  This resulted in an ‘after dark’ pulling from the muck by a backhoe graciously loaned to us from our neighboring Snow Resort – two driveways down the road.

I watched as team members who usually don’t get to serve on the same teams got reacquainted (our teams serve one weekend each month).  I watched as several new team members just completing their training “Joined” the team, fitting in perfectly as they began their future with our ministry.  And, as I watched them interact I noticed that age and experience no longer mattered.  We were one team.

I would encourage all of you who lead in ministry to consider this type of event.  It was well worth the investment of my time  - I suspect, more than I even know.