The more time that passes the more I appreciate simple.

I decided because vacation the past few weeks has put me behind and looking at the busy agenda the next couple weeks that awaits me, I would spend the entire day getting caught up on projects and administrative responsibilities today.

Tonight was a complete surprise.  My two young nephews and brother-in-law were in town so we all decided to go out to dinner.

How quickly I forget the attention span of younger kids.  I watched as my nephew Adrian ate with one hand and rolled the tiniest balls of paper I had ever seen - made from his napkin.  The minute enough food had been eaten to create a 'filled for the moment' feeling - they were restless.  I soon realized the intended use for the tiny paper balls.  They fit neatly into a straw.

Soon they were off to a safe corner of the parking lot - launching the paper balls at anything that moved or could serve as a target.  Grandma was warned not to leave anytime soon!

As if we hadn't had enough food, we car pooled to the Dairy Queen next.  We were lucky enough to get a table out front as people began to clear out.  The next thing I knew I was doubled over in hysterics as the boys talked us into playing telephone.  Grown adults whispering into one another's ears and laughing as all of us tried to pass the correct message on.  It was pointless - everyone was laughing so hard we couldn't talk. 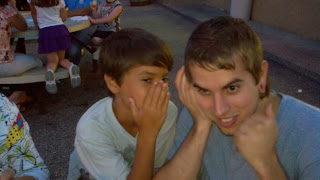 And so, in the midst of all my big plans and future projects,  the simple won out as my favorite part of the day...again.