hard to be back

I am once again sitting in my favorite place - my deck - writing. 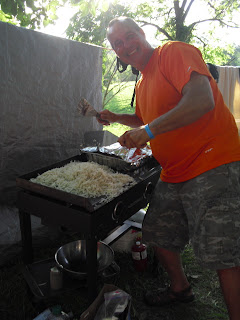 A camping vacation is good for you on so many levels.  Being out-of-doors for 5 days in a row makes you appreciate even the most simple of conveniences.  FIRST - A shower that actually cleanses you as opposed to making you feel more dirty than before.  SECONDLY - it clears the normal noise from your everyday.  Usually I awake to an alarm clock, but, all last week I woke to the loud morning proclamation from the birds that a new day has begun.  Although you would assume the alarm clock would be a much louder awakening - the birds will not be ignored if you are in a tent as we were.  So each day they do the duty of announcing morning then it's off to the business of a new day, which can be summed up perhaps as survival.  The other noise difference from home - well, at least different unless our son's band is practicing, was provided by mostly hard-core Christian bands that played from 10:00 am until 2:00 a.m.  That's an interesting 'early in the morning' wake up call!  But SO much fun and SO passionate! 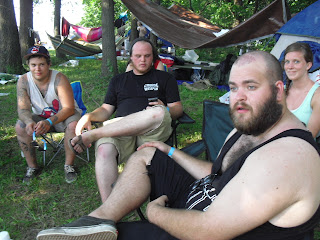 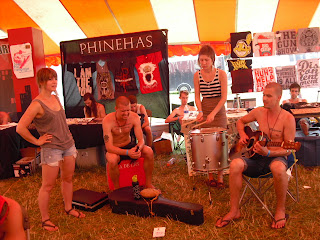 Our daughter's band is called La De Les, when the power went down on all the stages one afternoon they performed acapella. 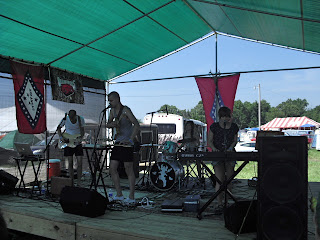 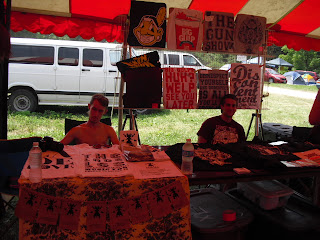 Both bands sold a huge amount of merch! That fills the gas tanks for the ride home!


Our son's band is called The Gun Show, they rocked the stage 4 times during the festival. 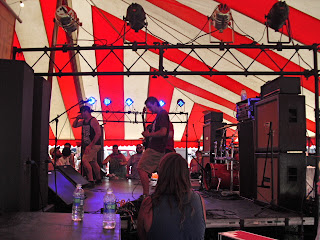 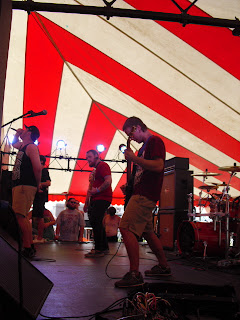 Besides the comfort of our own beds, tough things were waiting for us here at home.

- the loss of a young friend to heart failure


Ever since we received news of the loss of one our church friends our hearts have been very heavy.  He is of course dancing the streets of Heaven screaming praises to our God, but friends and family are horrified at life without this great man, father and friend ...

He seemed to have left us way to early - that is not for us to decide however.  God will use this dear man's passing in powerful ways, I am sure of it.  It doesn't make it easier to watch his family suffer with their separation from him.  So hard to see...

The second difficult thing - though in no way a comparison with death, occurred with one exit to go after driving all night long,  our daughter's van threw a rod.  They needed to get to Boston the next morning. They would have to find another way to get there...

There are many ways to look at this - a blessing? Not that I can see.  The van was the first 'band' purchase for this young group of musicians and they worked extremely hard to pool their money so that musical gigs were something they could attend together.  Now, just a month after purchase it is perhaps
unrepairable.  We worked swiftly to find a mechanic capable of a fast diagnosis.

Then we discussed this...what if the breakdown of the van protected them from being involved in a horrible accident or some other dangerous scenario? They all know the Lord personally and I truly believe God's protective hand was involved even in the loss of the engine.  We may never know for sure, but I firmly believe and trust the Lord has great opportunity in each circumstance of our redeemed lives.

So - we are safe, we had a blast with our kids and watching them use their talents and now it is back to normal.  Whatever that is.
Posted by Lori Biddle at 2:02 PM