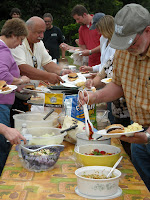 I basically plan not to move today!

This picnic has come to require the same amount of creativeness that our weekly programming does - just not as spiritual. I am always worried no one will come, or people will not want to participate or it will be boring...but, once again we had a blast.!

In the never ending attempt to be creative I often loose sight of the power of connection. Our department consists of many teams, many of which never cross paths in the weekly execution of the services, so this picnic is vital! Without exception people leave having met at least one new person.

When our friends offered to host the event I jumped on the chance to not only face the planning of the event, but the preparation of my own home and property! "Yes" was out of my mouth before they finished their invitation! (Thanks Crawfis'!) 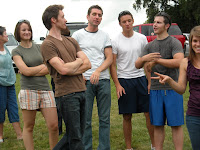 ic was left for me to organize.

The past year has been a year full of change, some of the changes were very difficult. Now however, God is beginning to reveal the 'next generation' that he is preparing to help lead Crossroads. This event gave me a physical chance to look across our teams and see the transition that has taken place this year. To visually see the different gifts this variation of ages brings to our department takes my breath away!

When Crossroads began we began primarily with very young leaders. At least in the area of worship volunteers. This caused us at times to struggle with the levels of maturity. We had to try to grow everyone up quickly. Then, as we settled into our middle years of ministry and all began to mature together, we realized we were not developing enough young people to join us. Now, I see the possibility of generations coming together like never before at Crossroads. And as I looked across the picnic I was very excited and pleased. A very balanced range of youth/maturity/experience - quite exciting!

The games I ask the picnic participants to play, of course caused them to work as a team - this brings me GREAT pleasure!

Some of our team members do not attend the picnic because they just prefer small settings, or because I cannot allow small children (based on the games above you can see why I cannot have kids there), but I wish I knew how to explain to them what they are missing...this has become one of our greatest opportunities to connect. I completely understand schedule conflicts and already planned vacations, but I remain fully committed to provide this opportunity, and next year will plan further ahead and become even more persuasive in my attempts to get people there!

I would encourage any of you from other ministries reading this to consider the same type event, it pays huge dividends throughout the rest of the year. All of the participants now have "remember when we did this..." type experiences to share, many were reminiscing about last years picnic while we were together...priceless!

Another result of this year's picnic was the creation of a possible new team, the Photography Team. We have had photography teams come and go through the years, but this time we are going to recruit a leader and train the members to take it from picture to completion in organizing it 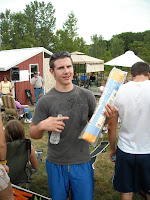 for us. When you get together in a relaxed setting - good things happen! Literally hundreds of pictures of this event were taken by several team members. I wanted to give you details of the picnic today, and later this week I'll post a picnic photo folder for you to enjoy - have a great week!

The final picture shows the prize everyone wanted - the ShamWow. (Scott, pictured here, negotiated a trade to acquire it! ha ha)

I am SO sorry we missed the picnic! I had company in town and thought they were leaving Sunday but ended up leaving today instead. I had a great time with them, but I was really disappointed to miss the picnic! So glad it went well. Looks like everyone had a great time!