Yesterday and all the past years of my life, my dad was a huge part of me.  This morning as he passed I felt just a little less whole.   Like something is missing now. 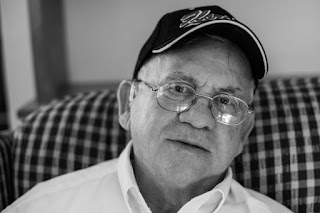 I am so thankful I got to be with him non-stop over the past few weeks.  But, it's been very difficult to watch the man I grew up in love with, shrink away before my very eyes.

This father of mine was strong and independent and suddenly in 3 weeks time became totally dependent on others.  All decision making was removed from him as he had doctors telling him what he had to do next and squads moving him from hospital to Hospice to home to Hospice..people bathing him and medicating him, I could hardly stand to watch all privacy and dignity be taken from him.

But, even as he was taken from the home he loved - he treated everyone kindly, his sarcastic humor had never been sharper and the stories that were told will be remembered forever by all that participated! And oh how he talked of the Lord - a testimony to the end!

Everyone had different ways of saying goodbye - I found myself even today as he took his final breaths stroking his arm and then kissing his head goodbye.  Both things were something I'm not sure I've ever done before.  But it's all I could do as we assured him it was ok to go to be with Jesus.

Later in his empty bedroom today, I started to go through pictures in preparation for the funeral and physically saw the little things he had that were important to him.   Simple things, things he's touched in the past, things I now need to hold for a little while.  These things all left behind.

This I know with more certainty then ever in my life - he is not in that coffin -  he has been welcomed into His Saviors arms!

All his hardships and all disappointments have faded, and all longings have been fulfilled with just one glimpse of Yahweh!  He probably fell on the ground in breathtaking amazement of God Almighty!

I loved him fiercely, and he encouraged me endlessly so I'm perhaps less whole without him.  But I think any loss, any trial, drives us to long more and more to be present with Jesus ourselves!  And only then - in heaven's glory will I too feel the glorified fulfillment that my dad experienced at 10:27 a.m. this morning.