I was deleting some of the notes I have on my phone tonight and came across some of the last ridiculous things my dad said or had said to people that repeated them to us. 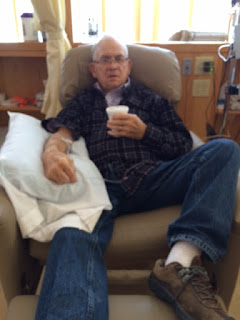 So here it goes:

He was heard to say to two ladies standing in the aisle of church, "ladies if you're going to block the whole aisle then put up your wide load sign!"

A friend was visiting dad and told him he didn't like St. Bernard dogs because they slobber.  My dad said, "You'd slobber too if you had 11 kids!"

Dad often said he was so poor he had to have a co-signer to change his mind!

He once said to some poor soul - probably one of his long-time barbershop buddies, "If ugly was music you'd have a whole orchestra!"

At the hospital in his final weeks he said as he pulled out the urinal and we all cleared the room, "I have no idea where everyone is going, they're usually taking pictures of everything under the sun."


He ALWAYS had us howling laughing, and there's just not quite as much laughter when we get together now, that is unless we start repeating his ridiculous sayings and comments!

I miss you dad - your were a great father and were madly in love with Jesus, and for that I can never thank you enough...